Court of Justice of the European Union: Al Salam ferry disaster claims shall be heard in Italian Courts 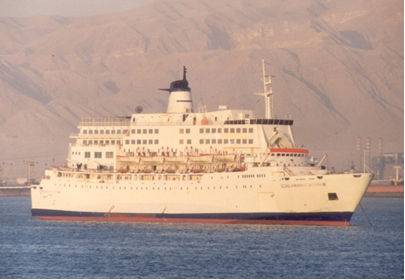 The relatives of more than 1,000 people killed in a deadly ferry accident in the Red Sea in 2006 are allowed to pursue their claims for damages in Italy. The Court of Justice press release no. 56/20 dated 7th May states: «The victims of the sinking of a vessel, which sailed under the flag of Panama, may bring an action for damages before the Italian courts against the Italian organisations which classified and certified that vessel».

This judgment of the European Court of Justice address the case involving claims by a large number of Egyptian survivors and relatives of the victims of the sinking of the Al Salam Boccaccio 98 ferry brought against RINA, a major Italian company that certified and classified the ferry as safe.

Earlier this year the Advocate General Maciej Szpunar issued a similar opinion suggesting that Italy should be the forum for such claims.

More than 1,000 people were killed when the Al Salam Boccaccio 98 suffered a fire onboard, capsized and sank on Feb. 3, 2006 in the Red Sea en route to Egypt from Saudia Arabia. It was one of the worst maritime accidents in modern times, and the the ship was allegedly operating despite serious defects.

The ferry was flying a Panamanian flag but it was certified/classified by the Italian companies RINA S.p.A and its parent company, the Ente Registro Italiano Navale, specialized in the assessment of sea vessels’ safety. Both companies are based in the major Italian port city of Genoa.

In 2013, hundreds of survivors and victims’ relatives filed a common multyparty action for damages before the Court of Genoa against RINA and Ente Registro Italiano Navale. The plaintiffs argued that certifying/classifying  the ship as suit for use caused the shipwreck.

The defendants argue they were acting on behalf of Panama and therefore should be legally shielded.

Even though the ship was registered in Panama, Szpunar said the disaster’s victims should be allowed to seek damages in Italian courts against RINA and its affiliate.

The defendants did not seek immunity for claims of negligence related to surveys dating up to 1999, when the ship was still under Italian flag. Such pre-1999 claims would have therefore continued before Italian Courts anyhow.

The Luxembourg-based European Court of Justice, however, sided with the Advocate General’s opinion and the plaintiffs’ arguments.

The Court of Genoa was seeking an opinion from the ECJ whether it should grant immunity to the Italian companies or allow the case to proceed. Plaintiffs repeatedly requested the Italian Courts to refer the case to the Court of Justice and this eventually was granted in 2018 only.

Szpunar argued that on matters that «do not fall within the competence of public powers», immunity does not necessarily apply. The Italian entities were delegated by Panama the power to classify and certify the vessel, but their work «cannot be regarded as proceeding from the exercise of public powers» and therefore cannot benefit from immunity, the opinion stated.

The European Commission  in November of 2019, too, argued that the plaintiffs were right and the case should proceed in the merits before Italian Courts and not in Panama.

Today the European Court of Justice acknowlegded that jurisdictional immunity does not apply to such conducts, hence to negligence claims as those brought by the victims of the sinking of a vessel against a classification society and/or a recognized organization.

A comment from the Italian lawyers for the plaintiffs, Stefano Bertone (Ambrosio & Commodo) and Marco Bona   (Bona Oliva Associati, MB.O) states that «this puts and an end to a 8 years battle showing that Genoa Court and Genoa Court of Appeal were wrong whenever they did not reject RINA’s forum shopping motions».

Lawyers for the plaintiffs are based in the U.S.A., United Kingdom, Spain, France, Egypt and Italy and have all exstensive experience in maritime cases as the Exxon Valdez, Costa Concordia and Norman Atlantic, aviation disasters as Concorde and Air France flight AF 447 as well in other complex mass-tort cases such as PIP breast implants, Volkswagen dieselgate.

The Italian-made ship sank during an overnight crossing between Saudi Arabia and Egypt with more than 1,400 people aboard, most of them Egyptians returning home from work in Saudi Arabia. A fire aboard the vessel and weather conditions are believed to have contributed to the ship’s sinking.

Four years before the Al Salam Boccaccio 98, a sister vessel named Al Salam Petrarca 90 suffered a fire onboard, capsized and sank in the Red Sea en route to Egypt from Saudia Arabia. Al Salam Petrarca 90 was part of the same fleet and it was classed and certified as safe by the same RINA companies.

Plaintiff lawyers now expect Italian Courts to go rapidly into the merits of the case and that a technical investigation into the fire and the sinking should confirm that RINA has a share of liability in the disaster, as Egyptian investigators have assessed in the aftermath of the tragedy pointing in particular on the defectivness of the drainage system. «After so many years, the interest of the families we represent in the case is intact and we strive to deliver what they deserve». The lawyers recovered some scuppers of the sister ship Al Salam Carducci that in the aftermath of the tragedy had been promptly sent to India to the Port of Alang to be demolished. 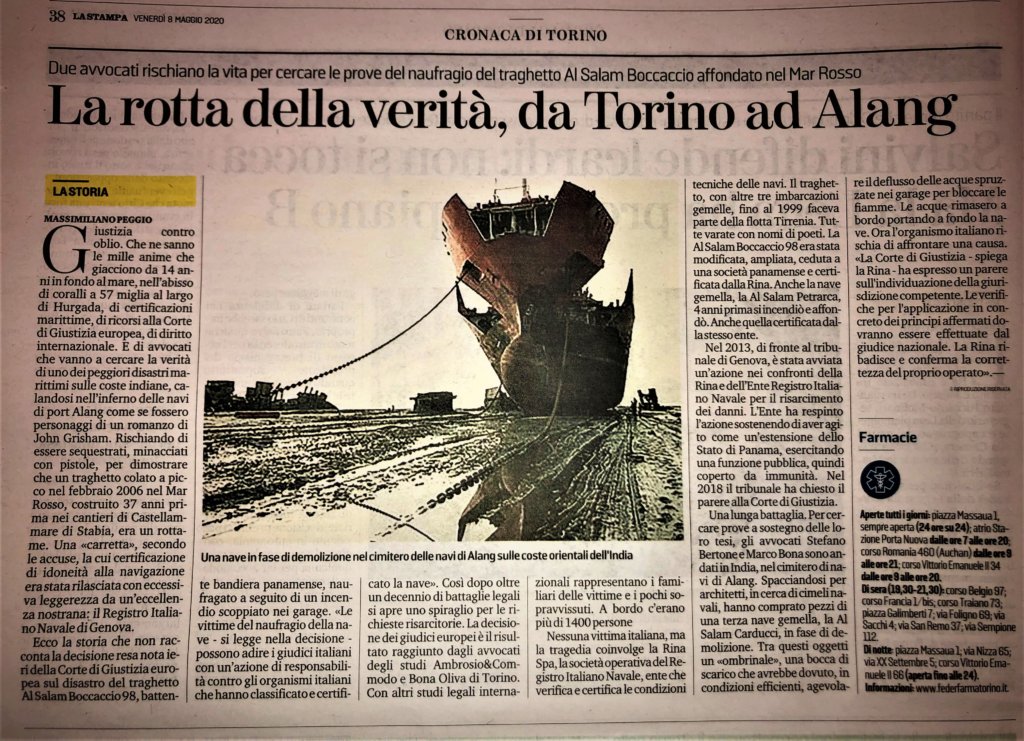 The case was brought under Italian law of joint and several liability, which means that if plaintiffs win the case they will be allowed to recover the whole amount of compensation from RINA.

In the proceedings before Italy as well as before the European Court of Justice the victims were represented by the Ambrosio and Commodo and Bona Oliva e Associati Italian law firms together with the lawyers Carlos Villacorta (Spain), Jean Pierre Bellecave (France), Nigel Taylor (United Kingdom ), Robert Lieff (USA) and Yasser Fathy (Egypt).At the hearing before the Court of Justice the presentation of the arguments for the plaintiffs was conducted by Professor Fausto Pocar with the lawyers Marco Bona and Stefano Bertone.